On 12 January, 1742 most of the land which made up Mikhalovskaya Guba was granted in perpetuity by decree of Empress Elizabeth, daughter of Peter the Great, to Pushkin’s great-grandfather, Abram Petrovich Gannibal, known as "the Negro of Peter the Great", for his services to Russia.

The poet first visited the family estate just after graduating from Tsarskoye Selo lycee and was enchanted by the natural beauty of the place, the poetry of the peasant life and the aura of the past. From 1824 until the end of his life Pushkin made frequent visit to Mikhailovskoye, where he also spent two years in exile. Mikhailovskoye became for him a place of intensive poetic creation. He wrote no less than 100 poems there and worked on chapters of "Eugene Onegin", "Boris Godunov", "The Gypsies" and "Count Nulin". During his exile there the poet was visited by his loyal friends from the lycee Ivan Pushchin, Anton Delvig, and Prince A. Gorchakov.

Today the Pushkin estate looks almost the same as on the lithograph by P.A. Alexandrov from a drawing by the Pskovian land-surveyor I.S. Ivanov made in 1838 .

The estate was created by Pushkin’s grandfather, Osip Abramovich Gannibal, on a small area bordered on north by a steep slope down to the River Sorot and on the south by the groves of Mikhailovskoye. On the west side meadowland stretches from the edge of the estate to the River Sorot and Lake Malenets. To the east the estate is adjoined by a broad glade surrounded on three sides by pine forest and birch groves, and on the fourth by a group of limes about 150 years old. From these lime trees an avenue leads down a slight slope to a pond with a wooden humpback bridge over it. And from the pond a path lined with rare "maple-raspberry" trees and bright flowers runs through a large orchard, dividing it into north and south sections, in the middle of estate.

The house is concealed by dense green bushes of lilac and jasmine, barberries and yellow acacias, so it is a surprise when in a mere fifty paces or so you suddenly come to the edge of this steep hill that slopes down to the river. From here through the green frame of lilac there is an unforgettable view of the surrounding countryside. Not far from the estate is the old Gannibal road that runs to Trigorskoye past Lake Malenets, on the far bank of which stands "the forest-covered hill" extolled by Pushkin. The road then continues to the "edge of Grandfather’s domains" and "the three pines".

Built by poet’s grandfather in the late 18th century this house was relatively small compared with the neighbouring estates. In his poem "To a House Goblin" the poets calls it "my modest parental abode", and in a letter to his brothers "the Mikhailovskoye log cabin" .

The hose measures 24 metres along the south facade, 17.8 metres along the north facade, and is 12.5 metres wide. It has five rooms and an entrance hall. Due to numerous alteration, fires and destruction wrought by two wars, very little remains from Pushkin’s day in Mikhailovskoye (as also in Trigorskoye and Petrovskoye). The actually buildings and the layout of the rooms are a modern reconstruction, and the display is structured mainly on memorial and literary-artistic basis. Unfortunately very few Pushkin memorabilia have survived.

ENTRANCE HALL. The display illustrates the history of the estate from its founding to the present day, Pushkin’s first visits here in 1817 and 1819, and his exile at Mikhailovskoye.

NANNY’S ROOM. This room was given to Arina Rodionovna when the poet’s parents departed from Mikhailovskoye leaving their elder son here in her care. The glass cases contain Pushkin’s manuscripts, letters, documents and reminiscences about his nanny, and letters dictated by Arina Rodionovna to Pushkin. Here too are samples of needlework from that time: pieces of embroidery by serf girls at Trigorskoye and maids at Mikhailovskoye.

PARENTS ROOM. Next to the nanny’s room is one traditionally called the "parent’s room". Pushkin’s relationship with his parents was complex. He was newer particularly close to them. The display here illustrates the beginning of the exile, the quarrel between father and son, the parent’s departure and Pushkin’s ensuing solitude and his work on "The Gypsies" and "Boris Godunov".

It includes some 18th-century engravings for Ovid’s "Metamorphoses" and an 18th-century icon of the Trinity with which Sergei Lvovoch Pushkin blessed the Marriage of his son Lev to E.A.Zagryazhskaya in 1843.

DRAWING ROOM. The "parents room" is adjoined by the drawing room or zal, which divides the house into two halves. The walls of the drawing room are hung with the portraits of Pushkin’s ancestors and relations ("grandsires portraits on the walls"). There was a billiard table here of the old type, destroyed in a fire in 1908. Ivan Pushchin recorded in his "Notes": "In the zal was a billiard table; this served as a pastime for him…" Mr Annenkov in his biography of Pushkin says he sometimes played alone using two balls.

DINING ROOM. Beyond the drawing room is the dining room. The literary display tells about meeting with lycee friends in 1825 (Pushchin, Delvig and Gorchakov), Pushkin work on the poem "19 October" and the long poem "Count Nulin" and the Decembrists uprising. The art display includes a copy of Orest Kiprensky’s portrait of Pushkin executed in the 1860s for the Pushkin Museum of the Alexandrovsky lycee. 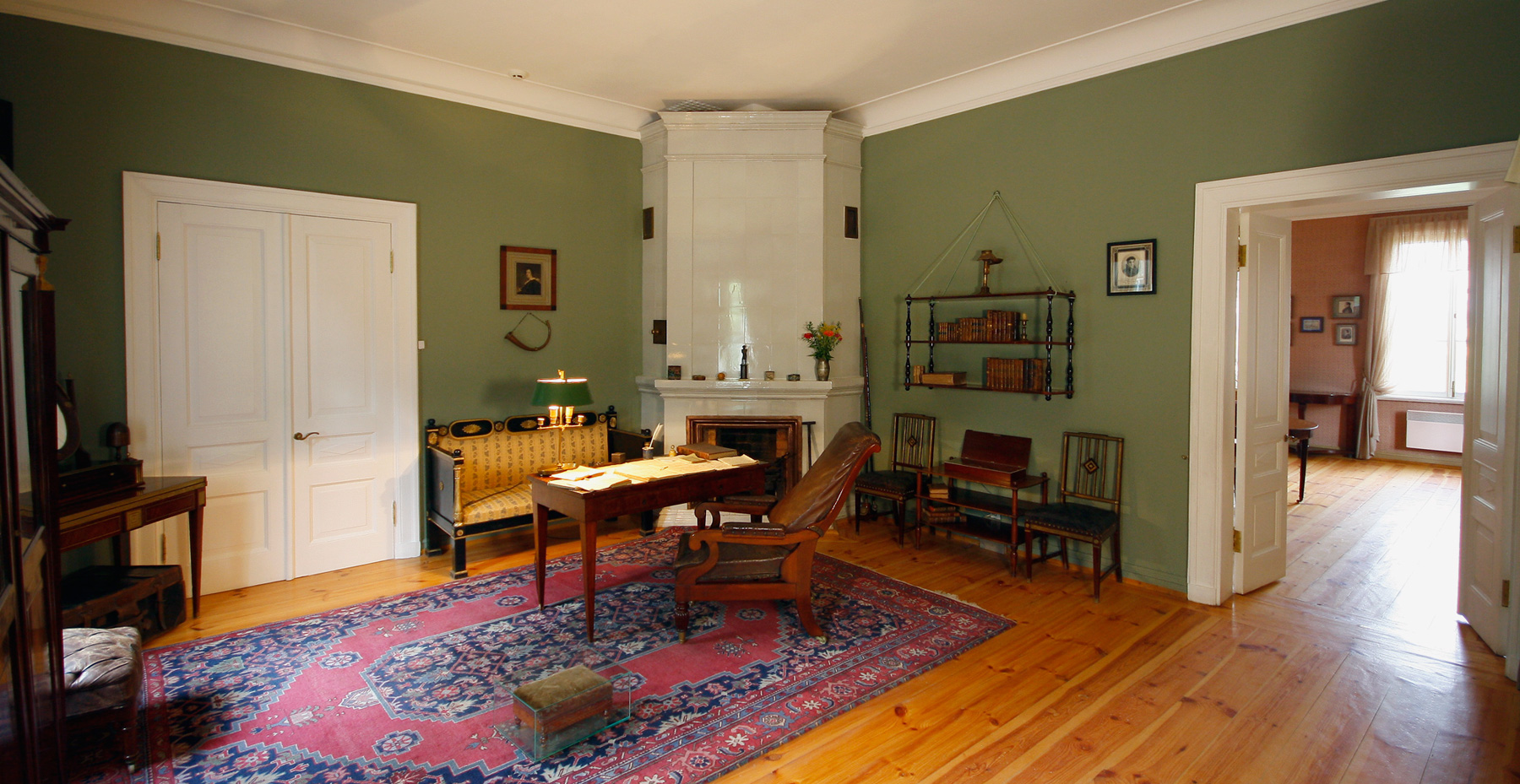 POET'S STUDY. Next to the dining room is Pushkin’s study. This room has been restored to its appearance in Pushkin’s day thanks to various documents of the time and reminiscences of contemporaries who visited Mikhailovskoye. In the middle of the study was a writing desk. By the writing table is an old leather armchair with a high back, an exact copy of the one Pushkin used. This armchair is from the Trigorskoye collection and was presented to the Pushkin House-Museum in spring 1964 by relatives of the Osipov-Vulfs. Next to it is Anna Kern’s small footstool, covered with light brown velvet which has faded with time. The Pushkin memorabilia in the study include his iron stick. Pushkin often took such a stick with him when he went for walks.

The display draws parallels with the study of "Eugene Onegin" which, in many respects, was "copied" from the Mikhailovskoye study of the poet himself:

A desk with an extinguished lamp,
A pile of books, and by the window
A bed that's covered with a rug
A view across the moonlit dusk

And this pale half-light,
And Lord Byron's portrait,
And the iron figure on the column
With troubled brow under a hat
And arms that are crossed tight. 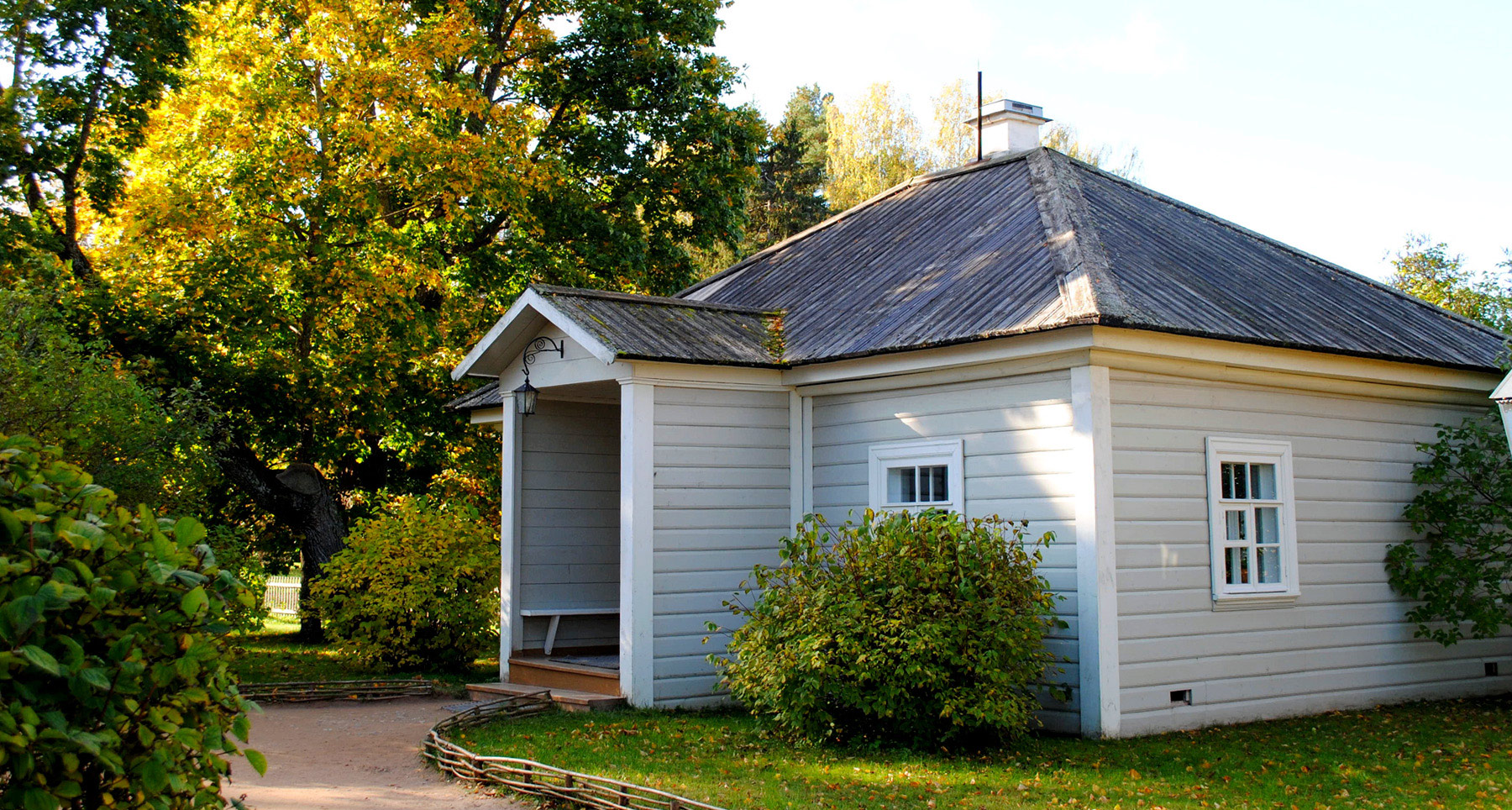 The "Nanny’s house" stands only a few yards from the main house, in the shade of an old maple tree, and is concealed almost up to the roof by bushes of lilac, yellow acacia and jasmine. This wing contained the bath-house, but when the family came to Mikhailovskoye for the summer, the nanny lived in a room in this bath-house. The "Nanny’s house" was the only building of Pushkin’s day at Mikhailovskoye that survived after the fire of 1918. The display here is mainly connected with Pushkin’s nanny and the construction of the traditionally Russian steam bath.

The kitchen wing, sold for timber by Grigory Pushkin because of its dilapidated state, was restored in 1955. The display here contains reconstructured interiors of the master's kitchen and the cook's house.

Mikhailovskoye park, created by Pushkin’s grandfather, Osip Gannibal, has survived well. The park is divided into two halves, east and west, by the central drive, an avenue of firs which begins at the decorative circular flower bed by the main house. At the opposite end of the avenue from the house is the private chapel on a small hill known as Poklonnaya Gora. Services here held in the chapel on family celebration and St Michael’s Day only. To the right of the avenue of firs a path leads past the "park attraction", the "Parnassion hills" and the small pond with a humpback bridge, to the Black(Gannibal) Pond, one of the most picturesque spots in Mikhailovskoye Park. On the left of the avenue of firs, in the middle of the park, is a wooden hexagonal summerhouse with a shortish spire, restored on the site of a summerhouse. Four small paths radiate from it. One of them, the birch path leads to a small pond covered with duckweed. And it is from this pond that one of the park’s most beautiful avenues begins, the avenue of limes or "Kern Alley" . From the east end of the "Kern Alley", between the edge of the park, which merges with forest here , and the orchard a path leads to the "Isle of Seclusion". It is a small island with group of pines, birches and limes in the middle of a round pond. Pushkin is said to have been fond of this secluded spot. 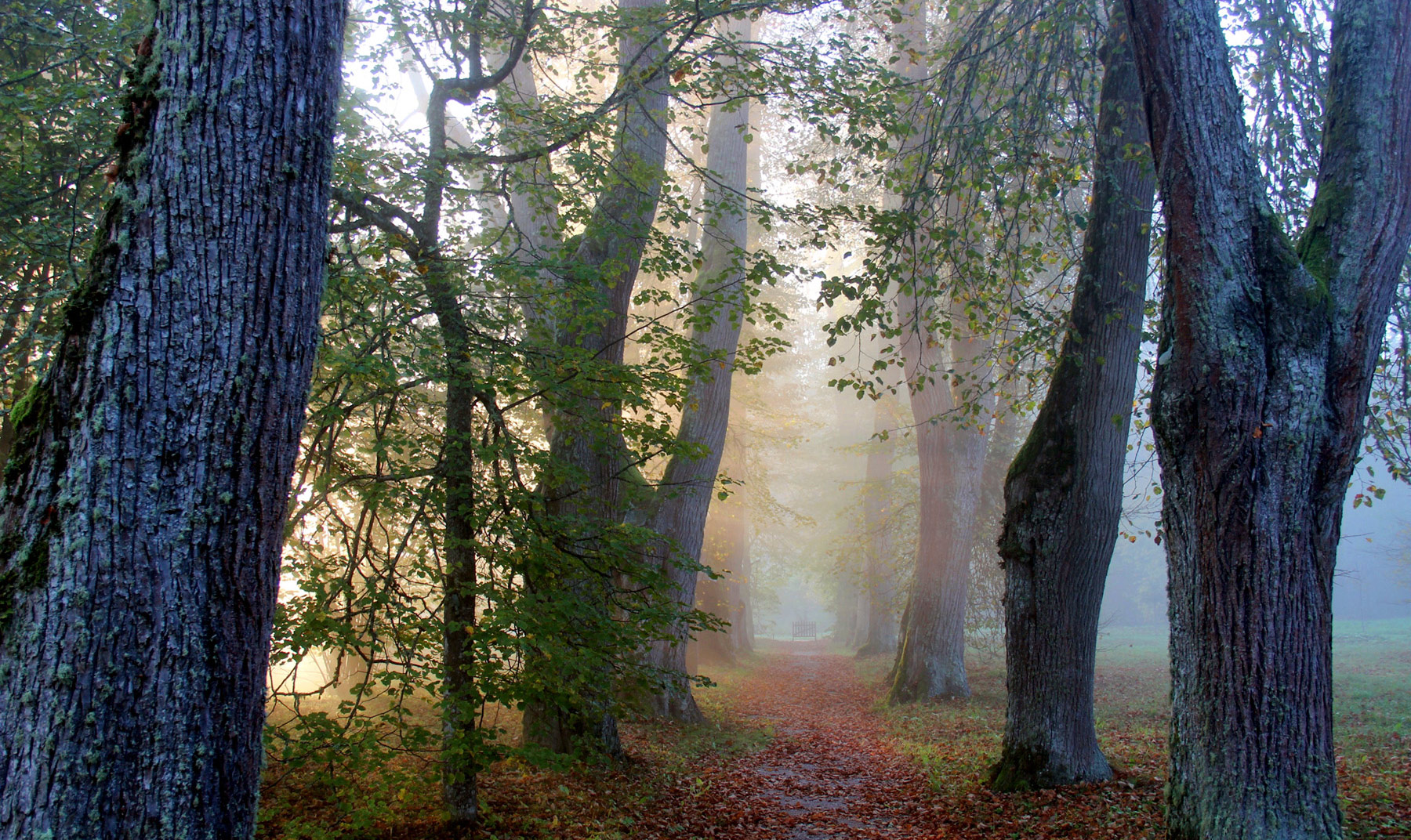