The estate of Petrovskoye, together with neighbouring Mikhailovskoye, was granted to Abram Petrovich Gannibal by Empress Elizabeth in 1742. It was named in honour of Peter the Great, Gannibal’s godfather.

Pushkin took a great interest in the unusual life of his great-grandfather, a Negro boy presented to Peter. On his first visit to Mikhailovskoye he met Gannibal’s son, Pyotr Abramovich, who gave him the so-called “German biography”, a written account of Abram’s life. When Pushkin was in exile at Mikhailovskoye, his mother’s cousin, Veniamin Petrovich, was living at Petrovskoye, a poet and musician who was able to appreciate Pushkin’s poetry. Pushkin visited Petrovskoye frequently, collecting material for autobiographical prose and notes about his ancestors.

In the village where Peter’s protege,
The favoured slave of tsarist royalty,
Forgotten member of their household,
My Negro great-grandfather hid away

The museum display provides visitors with information about the life and activities of three generations of Gannibals.

The story of Abram Petrovich Gannibal and his sons had always interested Pushkin. This heightened interest in his genealogy was for Pushkin not only a means of protection against the arrogant aristocracy, but also a source of justifiable pride. The poet’s paternal ancestors are frequently mentioned on the pages of Karamzin’s “History of Russian State”.

With the aim of reflecting the interests of the three generations of Gannibals whose names are associated with Petrovskoye, and bearing in mind that one of the main rooms in a country house of the 18th-19th century was usually the master’s study, a place for meeting and rest, the founders of the museum have recreated three such studies, conventially dedicated to Abram, Pyotr and Veniamin.

The display contains some of Abram Gannibal’s books (the remains of his rich library). These include the “System” and “Cheti-Minei” with notes by him on the pages. Here are also some personal possessions of the Gannibals: an 18th-century icon of the Mandilion and a cornelian seal with the coat-of-arms of the founder of the house of Gannibal in Russia, Abram Petrovich, future general-in-chief and the first African in Russian history.

In the large drawing room among the ceremonial portraits of Peter the Great, Elizabeth, Catherine the Great and one thought to be Abram Gannibal, there is also a painting of Ivan Abramovich Gannibal by an unknown 18th-century artist. The swarthy face lit by a sudden flame stares at the spectators, the dark eyes reflecting the hidden fire of an African temperament. 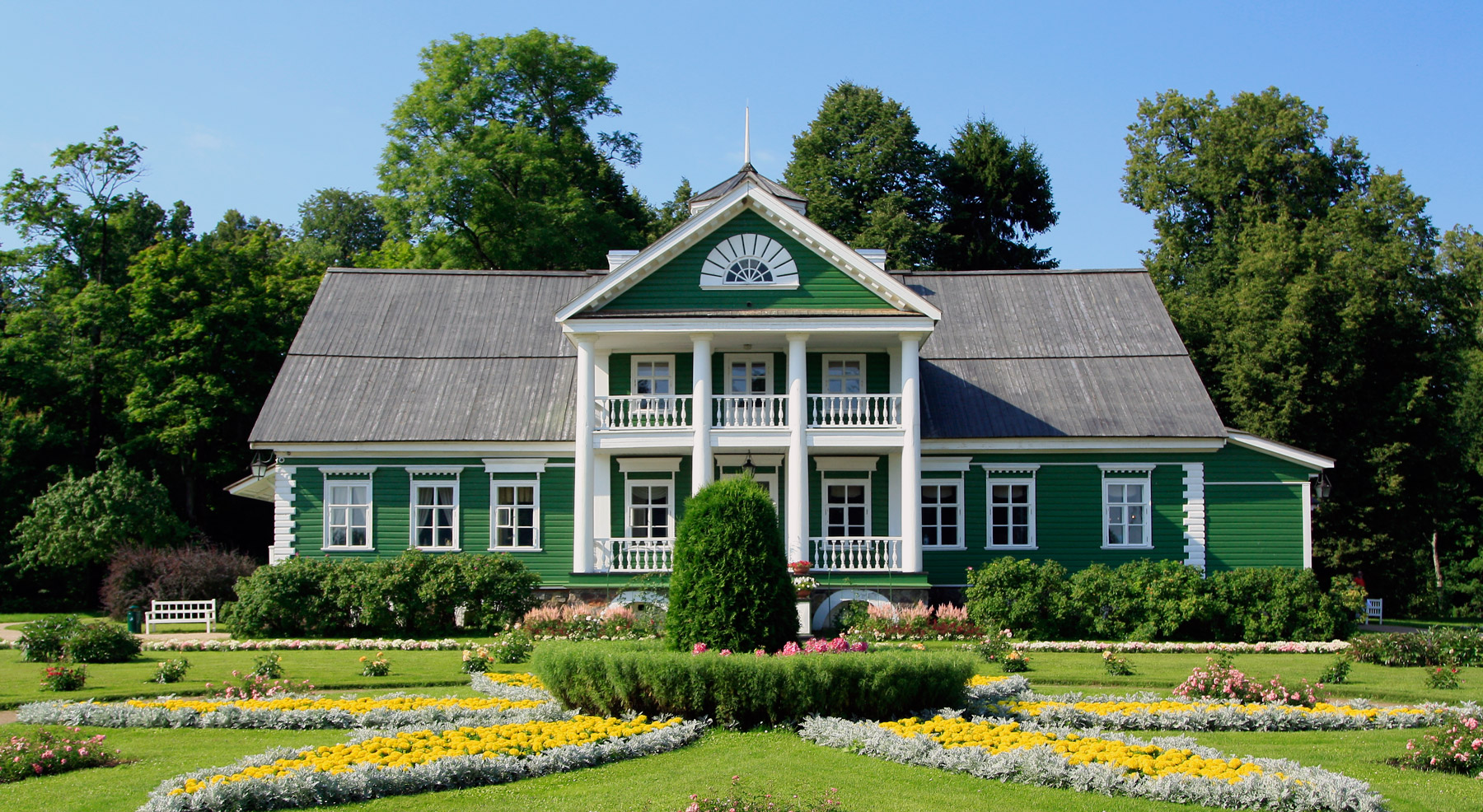 The old regular Petrovskoye park provided a splendid frame for the restored main house. It was laid out at the end of the 18th century, but the plans were probably drawn up by Abram himself, because it is a fine specimen of garden and park art in the first half of the 18th century.

The precise geometrical planning of the territory, about nine hectares in all, and the skilfully used natural relief with its rises and falls has for more than two hundred years born the slender phalanges of Petrovskoye’s lime avenues. The system of decorative and domestic ponds, the topography of the garden elements and accessories and the outlines of the avenue combine with the open spaces to create a most harmonic image.

The central point of the composition is the main house with the parterre in front of it. From the house towards the lake runs the main avenue of the limes, round the circular lawn, ending at the summerhouse-grotto. A landing-stage was built in front of it on Lake Kuchane. Other avenues radiate from the main avenue of limes, the grand lime avenue and the avenue of dwarf limes. All the trees in the avenues are about 220 or 230 years old. There are numerous traces showing that at one time the lime trees were clipped.

The park had various attractions, such as “Parnassian hills” and summerhouses, orchards planted in copses, and two artificial ponds, one next to Abram Petrovich’s first house, the other on the opposite side of the estate. Surrounding landscapes were also included in the estate’s composition. Thus, across the river Kuchanovka you can see the big fish-shaped pond with an oval island that forms the fish’s eye. There is also the traditional “isle of seclusion”. A vegetable garden was set out on the banks of Lake Kuchane.

The central avenue leads down to the lake, where in the distance the “poet’s home of exile”, Mikhailovskoye, can be seen in a mass of greenery. 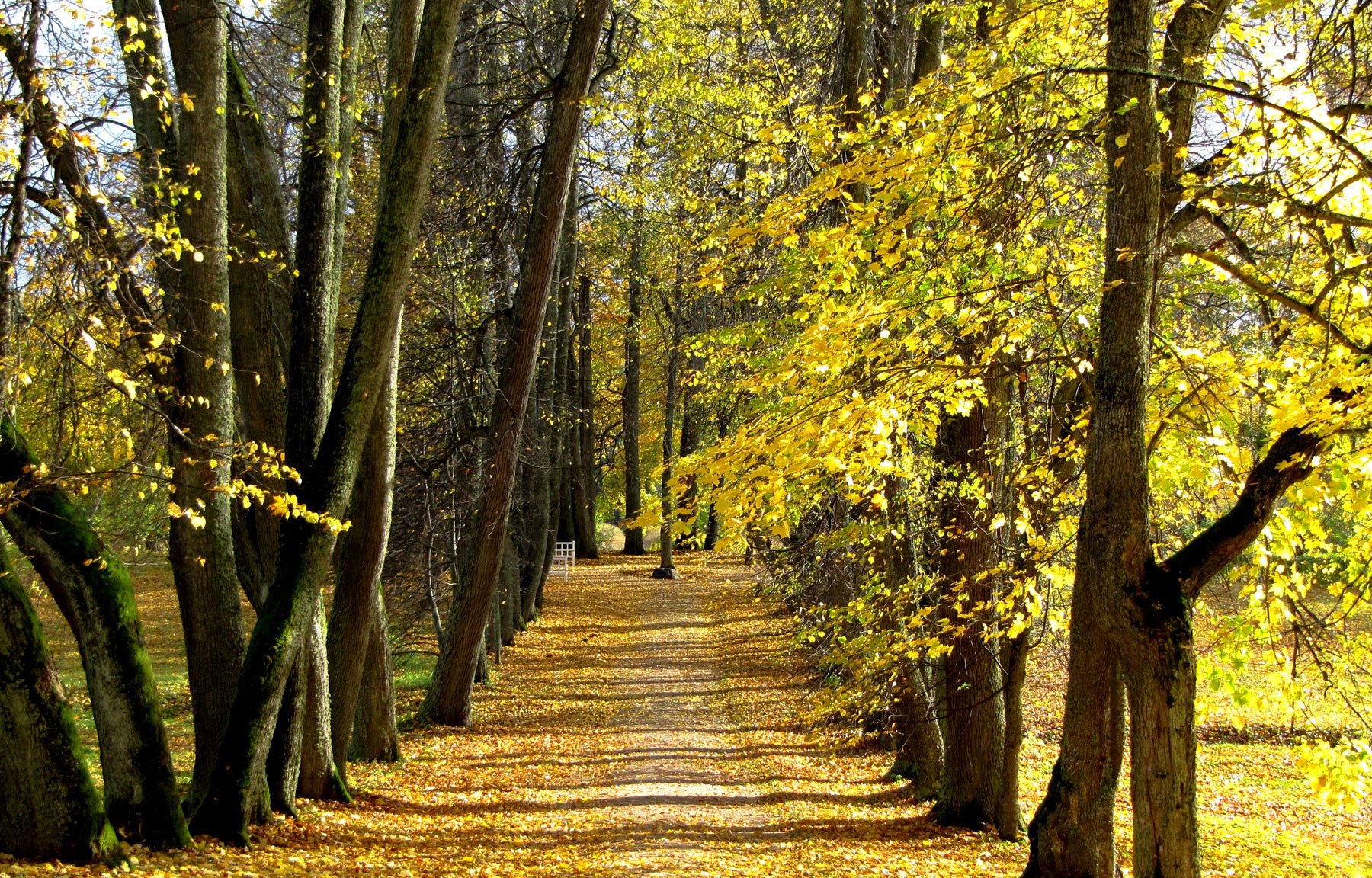 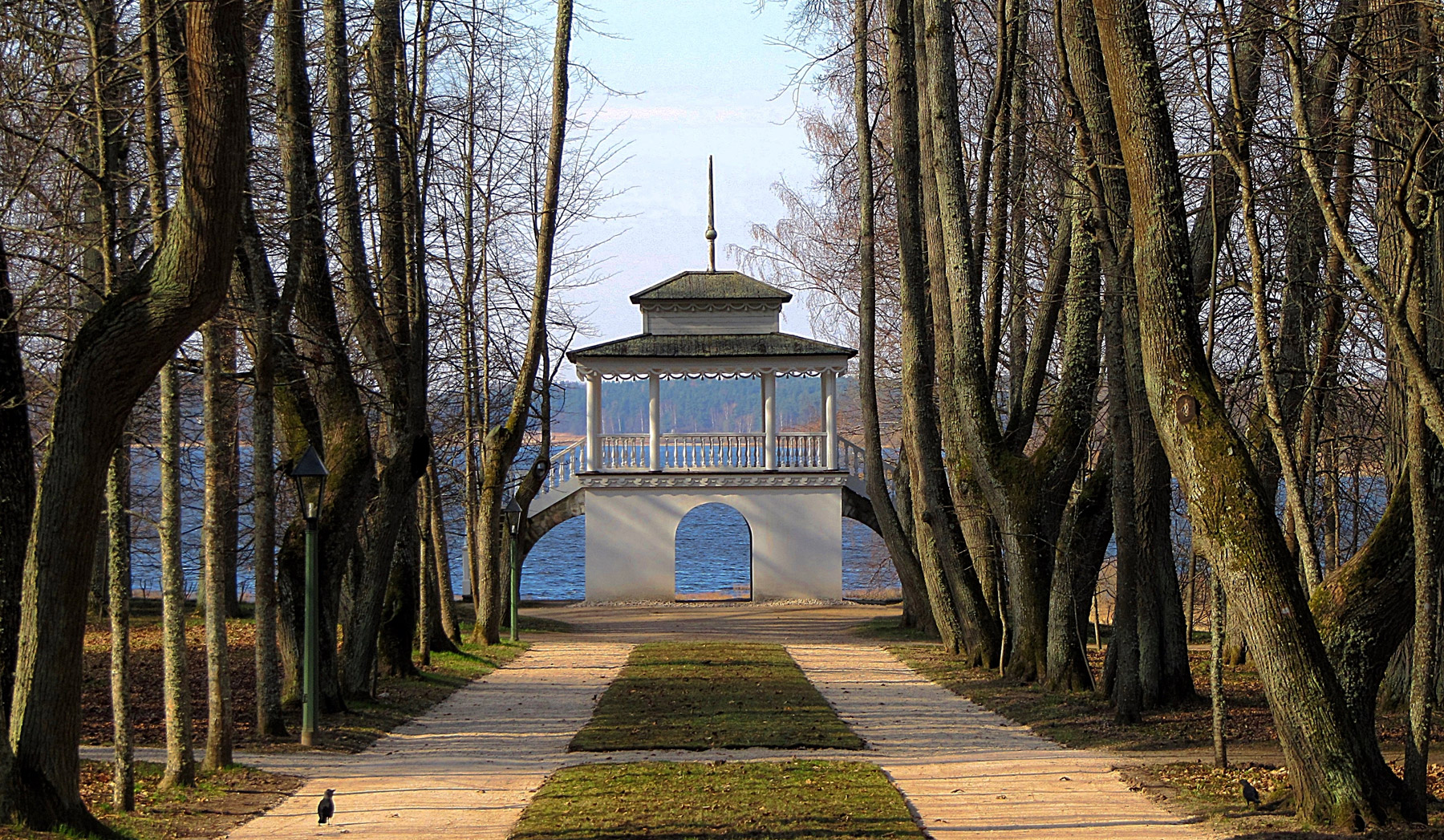