In Pushkin’s day the estate of Trigorskoye, so-called because it stands on three hills (“tri gory” in Russian), only three kilometers from Mikhailovskoye, belonged to Praskovia Alexandrovna Osipova. Pushkin met her during his first visit to Mikhailovskoye and she became a close friend and on occasions acted as his proxy. He often went to Trigorskoye, particularly at the beginning of his exile when he quarreled with his father. Praskovia Osipova’s daughters were all in love with the poet and treasured his friendship.

Her son Alexei became a close friend of the poet and his companion in merrymaking, amorous escapades and carousing. They also used to discuss politics, history and literary together. Some take view that many of the characters in “Eugene Onegin” are literally “copies” of Pushkin’s neighbors at Trigorskoye. Here he found the atmosphere of benevolence, “friendly freedom, youth and mutual attraction which was so lacking at Mikhailovskoye. The Trigorskoye Estate is traditionally known as the “Larin house”. Thematically it is connected with Pushkin’s dear friends, youthful escapades, flirting, merrymaking and talent.

To roam around Trigorskoye
Its meadow, stream and hill,
And garden under the homely limes. 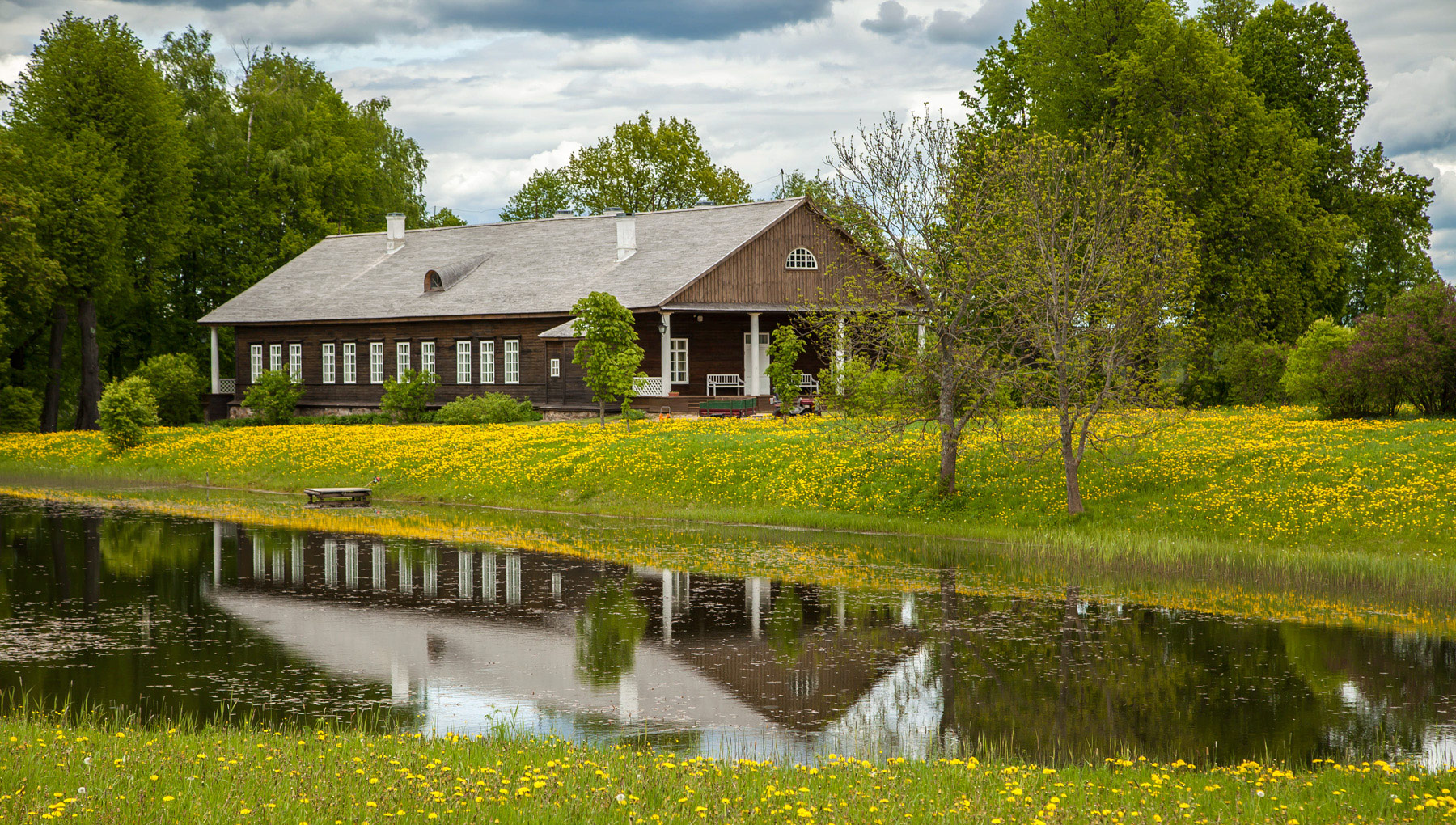 PANTRY. The small room contains material on the history of the estate, the restoration work of 1962, documents from the household archives, and 20th-century photographs. The painting of “The Larin House” by V.Meshkov (1916) is a reminder of the private Pushkin museum which the Osipovs and Vulfs kept.

DINING ROOM. The dining room was where the inmates of Trigorskoye liked to gather. Pushkin was often to be seen here too. The two small vases and trays in the pantry and on the dining room table are memorabilia. On the table is a cooler from Yevpraxia Vulf’s family. The samovar and carved oak table are from Trigorskoye. The literary section contains poems, drawings and letters from Pushkin, in which the names and pictures of the Trigorskoye inmates are often mentioned.

ALEXEI VULF’S STUDY. Pushkin first met Alexei Vulf, Praskovia Osipova’s eldest son, in 1824. Later they were bound by common interests and amusements. The study recreates the way of life of a student at that time. Later Alexei recognized himself in Lensky. As he put it, Onegin’s life in the country is “all taken from Pushkin’s stay here, in Pskov province”. Alexei Vulf’s study contains his original card table and armchair. On the walls are portraits of a relative (G.K. Borzov), his favourite poets, Schiller and Byron, and his friends Alexander Pushkin and Nikolay Yazykov. There is also an old firearm, like the one Pushkin and he (according to Vulf) took to “shoot at the star fixed over the gate”. The old chess table is a reminder both of Onegin’s lines and frequent meeting and disputes…

YEVPRAXIA’S (ZIZI’S) ROOM. This room recalls the literary figure of the “provincial young lady” brought up on books. The name Zizi (which family used to call the young Yevpraxia Vulf) appears on the pages of “Eugene Onegin”. In Zizi’s company there was often laughter, and Pushkin admired her youth and changing moods. The lines of the poems “If life should deceive you…” and “My advice to you, Zina, is play…” are addressed to Yevpraxia. In upper section of the cabinet you can see Pushkin’s present to Zizi, such as the decorated box and ladle for rum punch and an ink stand. Here too is a plaster cast of her hand.Below are objects typical of a young lady of that day, including an album which reminds one of Onegin’s lines:

You have, of course seen many a time
A rustic young lady’s album…”

There is also a large portrait of Yevpraxia (first third of the 19th century), everyday objects, portraits of relatives, a woodcut on the subject of Pushkin’s poem “The Talisman”, a nightingale-organ toy and an embroidery frame.

DRAWING ROOM. A place for meeting guests and relaxing, which recalls many a musical evening and the poet’s meeting with Anna Kern. It was here that the young inmates of Trigorskoye liked to exchange albums and write inscriptions in them. On the mantelpiece is the original clock from Pushkin’s day. There are paintings by West European masters on the walls. The collection was started by A.Vyndomsky. Two works have survived from that time, “Feedind the Pigs” and “Feeding the Horses”, engravings by John Smith from the original by Morland.

PRASKOVIA OSIPOVA’S ROOM. This room illustrates the mistress of Trigorskoye’s domestic responsibilities and her literary and artistic interests. From this corner room the mistress of the house could easily observe the work taking place on the estate. The original bureau, needlework table and ink-stand are from Trigorskoye. The portraits of close friends include one of Pushkin. There is also a death mask made just after the poet’s death by the sculptor A.Galberg. Almost as soon as Pushkin’s exile at Mikhailovskoye ended, Praskovia began to collect objects connected with him. These include the portrait of the German poet Schiller with a note in Praskovia’s hand saying: “From Pushkin. 1833”. Portraits of Pushkin himself were collected in the house, as well as his letters and books.

FORMAL DRAWING ROOM. Concerts and exhibitions are now held in this room. In the middle is a sculpture of Alexander Pushkin (E.Belashova, 1969).

LIBRARY. The Trigorskoye Library with its wide assortment of books is mentioned in “Eugene Onegin”. The original works (344 books) are now in the Pushkin House in St Petersburg. You can see coloured photographs of the original library in the glass cases. The library was restored in 1978. In 1998 the display was extended by the addition of duplicates and photographs, so the unique collection of books is easier to visualize. On a pedestal stands an old clock that belonged to Alexander Vyndomsky. And on the bookcases are busts of Karamzin, Lomonosov, Zhukovsky, Derzhavin and Emperor Alexander I. The library contains a memorial marble candlestick. There is also a box for letters that belonged to Praskovia Osipova.

MAID’S WORKROOM. This room now contains an exhibition relating to the estate of Golubovo, 19 km from Trigorskoye, where Zizi Vulf lived after her marriage to Baron B.A.Vrevsky. The display reproduces the interiors of the Golubovo house as they are shown on photographs of the early 20th century taken by Academician Yu.M.Shokalsky, Anna Kern’s grandson. You can also see a dressing table belonging to Zizi Vulf and Anna Kern’s kerosene lamp.

CLASSROOM. According to Maria Osipova it was to the classroom that Pushkin “used to come, sometimes on foot, and creep up to the house sometimes quite unnoticed; if it was summer, the windows would be open and he would suddenly climb in… We were all busy doing something, reading, working or playing the piano. Then Pushkin arrived and everything went topsy- turvy; the classroom was filled with laughter, jokes and talking.” 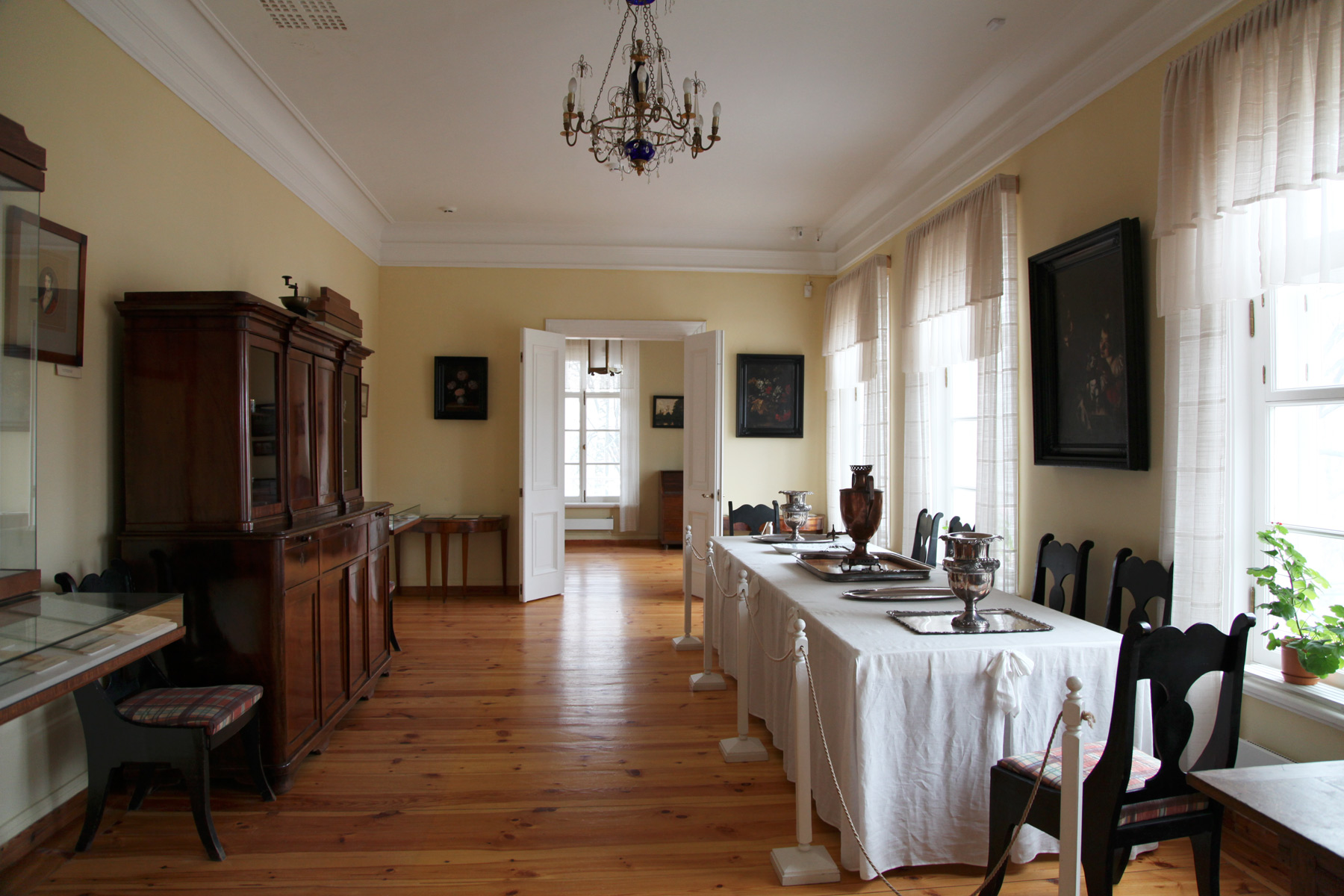 The central part of the estate originally contained the main house, from which a path led to a bath-house with a straw roof. In the 18th century this building was regarded as a “refuge for a recluse”. It is a fairly large building and used to serve as a house for guests, a place of rest in summer heat, and a bath-house. Next to it is the green summerhouse surrounded by old lime trees. Steps from it run down to the river. Another path from the bath-house leads to the so-called “Green” or open–air dance hall.

The park was laid out by Praskovia Osipova’s grandfather in Romantic style. The names of its poetic spots, “Onegin’s Bench”, “Tatiana’s Avenue”, the “Solitary Oak”, the “Tent Fir” and the “Saddle Birch” are all connected with Pushkin and his work. In 1996-1998 the restoration work in the park begun after the war was continued. The damage caused by the hurricanes of 1969 and 1987 was repaired. The memorial trees are now under special supervision. Trigorskoye park is mainly deciduous: lime, oak, maple and birch trees. There are some coniferous varieties (firs and pines) in the north-east section.

The main house originally stood on the middle hill. The main drive up to the house was a straight avenue which crossed the estate from the south-west. Part of a single –lane oak avenue survived, which turns northwards and joins “Tatiana’s Avenue”. Opposite the “Solitary Oak” oak saplings alternate with closely planted limes. All these avenue trees are about 230 years old. Trigorskoye estate is divided into three parts by the two large ravines that run down to the River Sorot. The eastern part contains the yard with the linen factory, stables, kennels, barns. .Some typical outbuildings have been constructed on the old foundations. The house is separated from the park by a long pond, the water from which flows into Sorot along an artificial channel. The estate has four 18th century artificial ponds, three of which form a cascade.

“GREEN HALL”. This rectangular square lined by lime trees served as a place of rest and amusement for the company at Trigorskoye. The guests frequently included their neighbours from Mikhailovskoye, Pushkin’s parents. The young people used to hold dances in the “Green hall”. The Vulfs, Osipovs, Pushkin and Yazykov danced the waltz, the galop, the quadrille and various folk dances. Wandering musicians were sometimes invited to the festivities.

“ONEGIN'S BENCH” One of the park’s most picturesque spots in the shade of old limes and an oak tree. The family associated the “bench” with the scene in which Onegin and Tatiana meet and declare their feelings.

“TENT FIR”. A giant fir which died from old age and disease in 1965. It was possibly a place for meeting and trysts. For Pushkin it was a reminder of the past.

“SADDLE BIRCH”. The big hollow in the tree was used as a “post box” for messages.

“TATIANA’S AVENUE”. An avenue of limes on the north-east edge of the park. The family identified it with Tatiana’s favorite place for taking a walk.

SUNDIAL. “Restored to operation” in 1997-1998. Young oak trees were again planted along the edge of the large circle in place of dead trees. They represent the “hours” from early morning to evening. In the middle is the hour hand (called “gnome” in the old days) placed at an angle of 57°40' (the latitude of the spot). It points straight along the avenue at the “solitary oak”. This is the “midday line”, that is, 12.00 noon. If you stand facing the hour hand you can tell the time easily and accurately from its shadow. 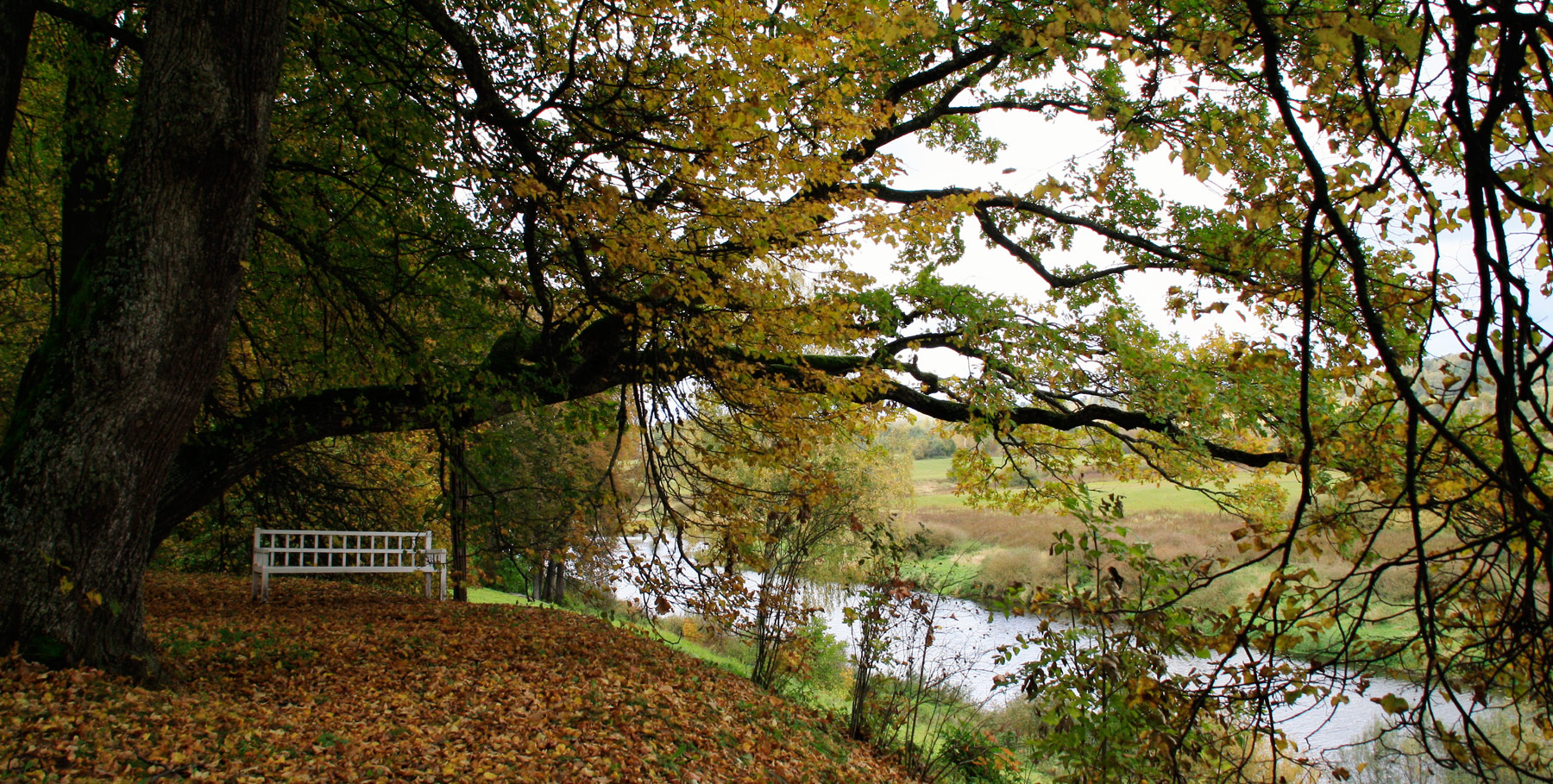